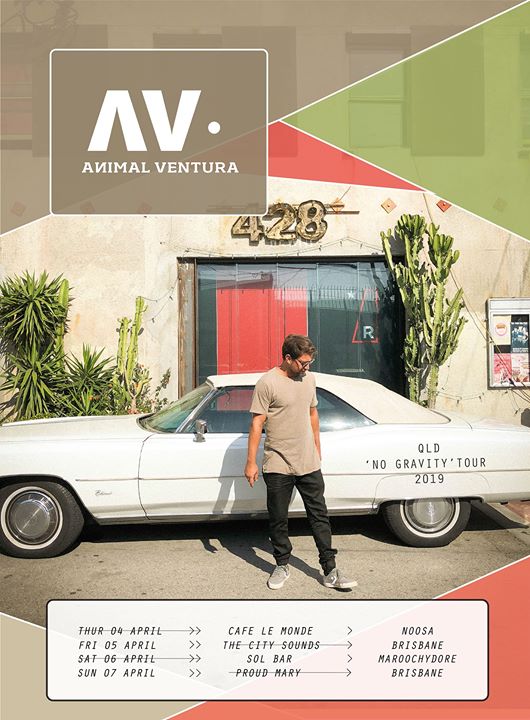 Animal Ventura is the solo project of singer-songwriter and multi-instrumentalist Fernando Aragones. Growing up playing punk rock and reggae in noisy garage bands in Southern Brazil, Aragones ventured to Australia where the eclectic sounds of the Sydney music scene beckoned.

The release followed by a massive National tour supporting Australian surf music favourites The Beautiful Girls. With his solo and electrifying ‘one man band’ performance, charming the stage to sold-out crowds across the country.

What sets Animal Ventura apart is a unique ability to fuse effortlessly his innate funk rhythms from his native South America with the coastal indie folk of Australian shores, combined with the new wave of live looping and his thirst for solid neat beats. To top it off his soothing and timeless vocals hold strength and passion in their delivery.

The result is bringing together the sounds of the musical genius of Stevie Wonder, Buena Vista Social Club and Sublime to a solid beat you can’t help but move your body too.

It’s very little wonder that this eclectic artist has been quickly embraced – from the skate parks in Brazil to surf breaks across Australia, Animal Ventura rapidly has stormed the industry with numerous festival appearances and gigs throughout Brazil, Europe, the UK and New Zealand, as well as chalking up some Aussie royalty supports.

Whether at solo capacity or with his full band mode, Animal Ventura’s live performance is dynamic, rustic yet polished and has the ability to transport the listener to different parts of the globe through stunning music.

“If sinfully smooth vocals and dynamic melodies are your thing, then chances are you’ve already heard of Byron-based, Brazilian-born multi-instrumentalist Animal Ventura (aka Fernando Aragones).” – The Soundcheck

“Animal Ventura and its copacetic frontman Fernando Aragones dive feet first into a summery and warm set that captures the spirit of earthy Brazilian/Samba soul traditions, wired electro-jazz, hip-hop, and more – then weaves it all into a neat and stunningly lean whole.” – The 12th Block

“His vibrant guitar and vocals gave a contemporary feel to an indie singer-songwriter sensibility. His musical treatment gives an uplifting feel to his sound, with vocal stylings reminiscent some of my favourite Jamie Callum tracks.” – Timber and Steel

Christmas is less than one month away and the gift

INtroducing the new ON Cloud shoes from @feetfirst

Got to be IN it to win it! @reedandco.co are giv

An INspiring new exhibition is launching this Frid

The photos are IN! We’re you papped at @lighty