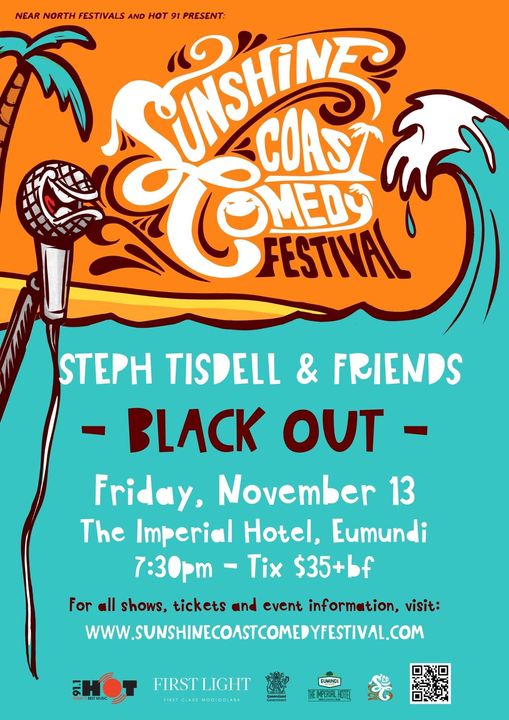 One of the brightest stars to explode on the Australian comedy scene in recent years, Steph Tisdell is bringing the brightest up and coming Indigenous Comedians in Queensland to the coast for her award winning show, Black Out. With warmth and wit which has won her rave reviews the world over, don’t miss Steph and friends at the deadliest show this year!

A luminescent presence on stage, her warmth and wit has been a hit with audiences. Her award-winning solo shows sell out around the country and she’s frequently booked to play the biggest gigs on the most prestigious stages where she holds her own alongside the world’s best. As a result, she is fast becoming a ubiquitous presence on mainstream television being a regular guest on The Project and Hughesy We Have A Problem.

An earlier interest in politics saw her first enrolling in law, and this sense of social justice matched with her formidable intelligence enables her to deliver social insights that challenge cultural stereotypes in a way that is hilarious, relatable and importantly, as a proud Indigenous woman, powerful.

Authentic, ebullient and endearing, she’s changing the world while taking the piss all at the same time.

PRAISE FOR STEPH
“An impressive grip of complicated material…Tisdell will become one of those must-book favourites in years to come ★★★★”
— THE MUSIC
“warmly funny, immediately relatable, fast on her feet and generous with her audience ★★★★
”
— TIME OUT
“carefully balances the hard truths Indigenous Australians face with tongue-in-cheek jokes and hilarious quips…hilarious and informative ★★★★ ½”
— ADELAIDE NOW
“Riotous, audacious and incredibly smart…Tisdell’s message of empathy over apathy is one that we all need to hear ★★★★ ”
— ARTS HUB

Did you know that @weaver.green_au rugs and runner

INtroducing Chris and the team at @antiquesandposs

An INspired collection of the most beautiful home

An INspiring new art exhibition about to open at @

INdulge in the finest and freshest at @noosafairbu