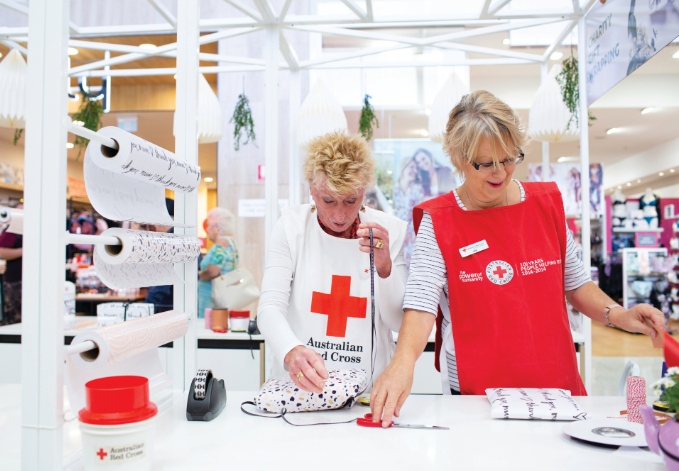 Noosa Civic Shopping Centre is more than a retail and dining destination, it’s a shopping centre with a conscience as Jolene Ogle discovers.

It’s easy for big business to only focus on the bottom line, but in Noosa, we do things differently. Noosa Civic Shopping Centre is setting a shining example of how big business can team up with community groups to support
the most vulnerable in our community.

You may have seen the wrapping table that pops up at Christmas or the school holiday events underway in the food court. Every event is a chance for Noosa Civic to join with community groups and raise funds.

“We know our customers value localism and community, with an increased desire for companies to step up and be more community-minded and focus on social good,” she says.

“We couldn’t be happier to be a putting our efforts into this space, there are so many wonderful local charities and organisations here in Noosa that we are fortunate enough to have partnered with and supported over the years.”

This year alone, Noosa Civic has supported a host of local groups including the Australian Red Cross through their Mother’s Day gift-wrapping initiative; and in July, local kids helped support The Ronald McDonald House through the Build-a-Bear workshops.

Throughout the September school holidays, the Mini Chefs campaign taught kids how to cook using fresh ingredients and also raised funds for Slow Food Noosa’s School Kitchen Garden Program that teaches kids how to grow and use fresh produce.

KRCH Chairperson Carol Raye says the hospice relies on the support of businesses such as Noosa Civic and the people who shop there to ensure they can continue to operate.

“We can only continue to offer this expert care with support from our community and the support from the team at Noosa Civic Shopping Centre ensures we can help people live their last days with respect and dignity,” she says.