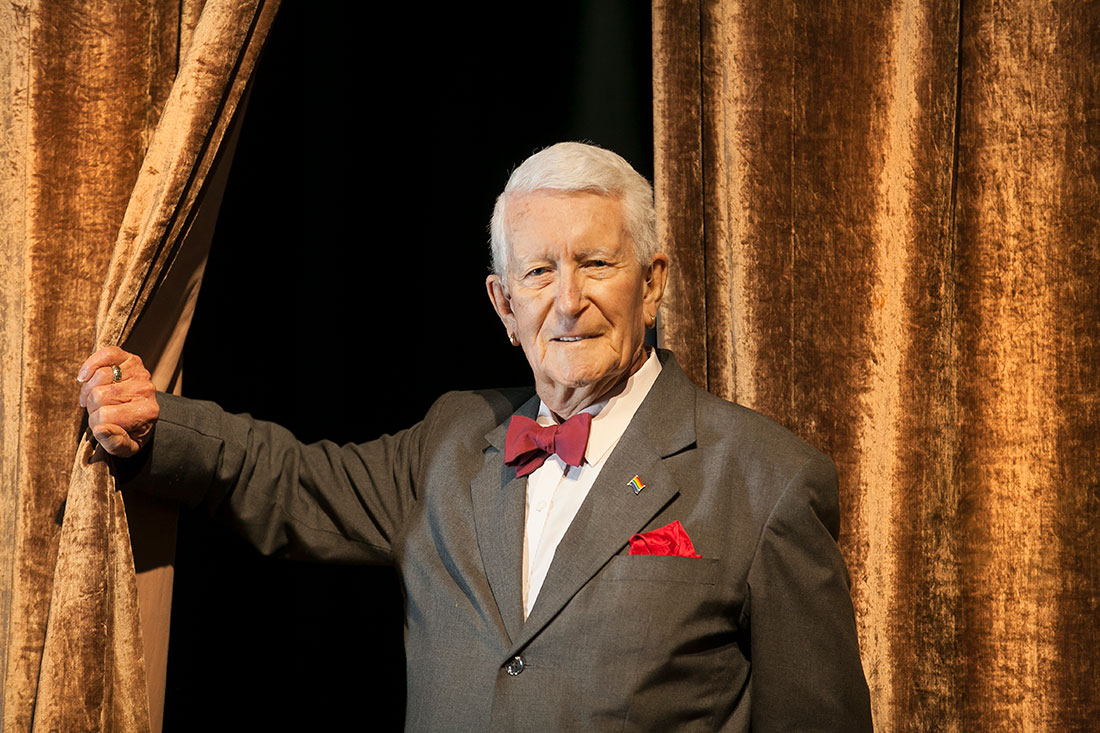 Nothing matches the excitement and anticipation when the lights go down and the big screen flickers to life in a theatre. John Caruso meets Ron West, who’s had a lifetime fascination with film.

There wouldn’t be many of us with a direct link back to the time when ‘talkies’ first came to town and that’s what makes recording an episode of our podcast, Conversations in Noosa, with Ron West so magical.

He’s a film fanatic, silent movie enthusiast and organ player who got a taste of showbusiness early in life.

“Professionally, my father was a dentist, however he was also a musician who worked for many years in the pit of the local theatre, grandly called The Opera House,” he said.

“This was in New Zealand. My father was born in 1879 and he was 16 years old when the first ever films were shown. He played there until ‘talkies’ arrived, and the orchestra was disbanded.
“When I was 16, I left school and I got a job as assistant projectionist at the very same theatre,” recalls Ron.

Following a number of years working for Greater Union Cinemas in Sydney, Ron settled in Cooroy in the early 1970s. When he heard a good mate of his, David Stratton, was taking six of the best films from the Sydney Film Festival on the road as part of a travelling film festival to bring foreign cinema to parts of Australia that wouldn’t generally be exposed to that kind of experience, he suggested they tour the Sunshine Coast.

“However, he said that Queensland was not the sort of place they wanted to visit because of Premier Joh Bjelke-Petersen’s strict cinema and book censorship board,” remembers Ron.

Persistence paid off. “I kept at it for a few years and by 1973 I received a call from David early one morning who asked if I was serious about wanting the travelling film festival on the Sunshine Coast and I restated my case, suggesting that the large groups of German, French and Italian residents would support it,” Ron says.

Stratts told his mate Westie that if he found a cinema he could show the films.

What followed was a coast-long search from Caloundra to Noosa with theatre operators turning Ron down until he discovered a small theatre in Pomona called The Majestic.

The film festival at The Majestic Theatre that year was a huge success and with Ron’s experience in operating and running cinemas he could see the potential in purchasing the Factory Street theatre in Pomona.

The heritage-listed theatre has changed hands throughout the years and following a brief hiatus, Ron has returned to performing at The Majestic a couple of night a week.

He’s particularly looking forward to playing a newly-restored organ that was originally bequeathed to the Empire Theatre Toowoomba however because of its size, the organ now has a new home in Pomona.

Hear the full INspiring story on the Conversations in Noosa podcast with Ron West. Available on all your favourite podcast platforms.