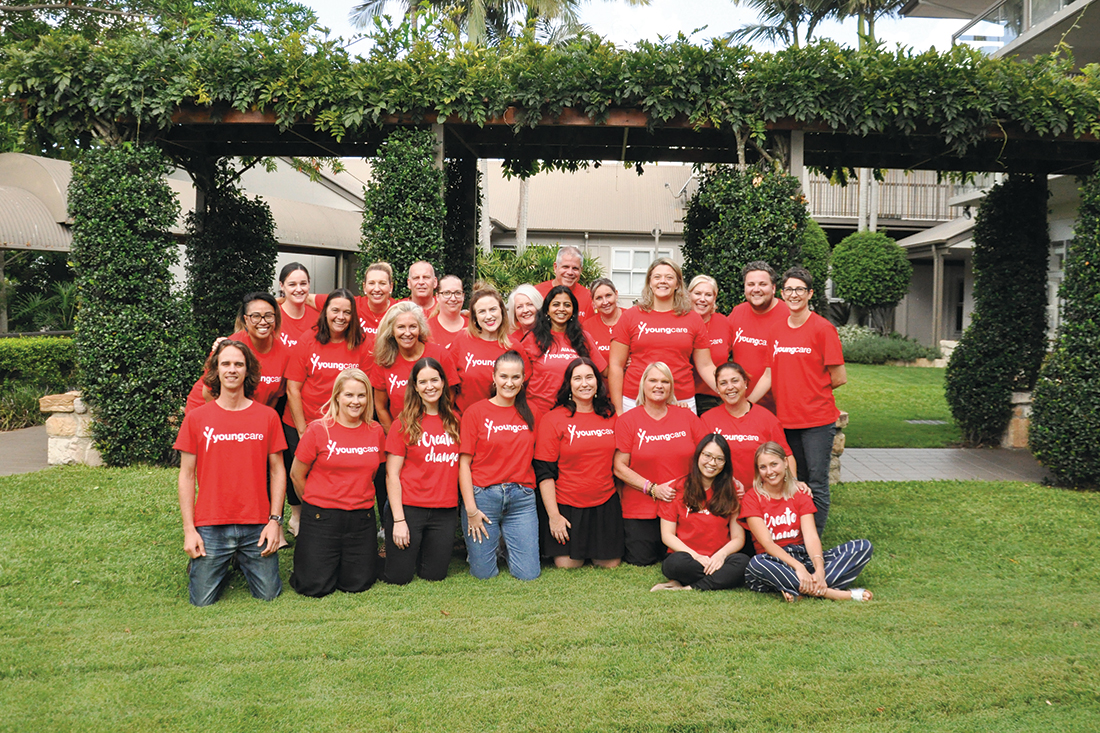 In a second your life can be changed. Thankfully a homegrown charity that started with a personal crisis has grown to help thousands of families in need. Deb Caruso finds out more.

Until Youngcare was established some sixteen years ago, if you were born with a severe physical disability or suffered a life-changing accident between the ages of 18 and 65, you would be destined to spend the rest of your life in an aged-care institution.

Youngcare CEO Anthony Ryan said when families were thrown into an absolutely horrendous series of events they never planned for; they are lost, not knowing what to do or who to call.

“That’s where Youngcare comes in,” he said. “There are around 480,000 people in Australia needing some form of disability assistance and having suitable and appropriately-supported housing is one of the greatest areas of need.

“Youngcare deals with the high physical support area and that affects about 28,000 Australians; 12,000 of them in Queensland.

“It’s a lot to take on to care for someone with high physical needs,” he said. “The families of the people we tend to look after are often struggling financially and because of the immense toll, divorce rates are often high.

“These are some of the most vulnerable young people and families and they are in our suburbs having to make tough decisions and sacrifices.”

Youngcare tries to help them live a better life from providing advice to grant funding; and building fit-for-purpose residential facilities.

“Currently, if you can’t change your family home to retro fit it to your needs, you go to a nursing home or aged care facility. We want to change that and support young people to live in their own homes and be around their loved ones and their community,” he said. “And if they can’t get equipment through normal funding, we’ll supply it.

“We’ve seen our role as advocates and teachers and have tried to lead for others to follow. However, with the NDIS there is funding now available to help us actively fill the gaps we see.”

Youngcare is part of the national Young People in Residential Aged Care Reference Group which aims to have no young person living in residential aged care by the end of 2025.

“It’s a big goal but something to work towards,” he said. “So much needs to change first. We want to tell the truth and tell it passionately to the people that matter. The real stories about the humans who are impacted by decisions. Some of the best work we do, no one ever sees.

Anthony recalled receiving multiple requests for a Cough Assist Machine and particularly one family where the mum and dad were doing two-hour shifts to ensure that their son didn’t choke on his own saliva as he struggled to breathe through the night.

“Can you imagine that?” he says.
“They had been passed between government agencies due to an oversight; we took this to Canberra and now those machines are on the public register. Think of all those individuals and families who can now sleep better.”

While the NDIS has been welcomed, Anthony says there are still a lot of gaps. “It is our role to advocate on our clients’ behalf so the government can understand and close the gaps,” he said.

The recent launch of Youngcare Connect, a free phone service to people navigate through a very complicated system has already reached 1,100 phone calls per month.

“Through no fault of their own, families find it difficult to understand some parts of the NDIS. We’ve got therapists, social workers, support coordinators as part of the team and we can provide help over the phone or, preferably, face-to-face.

Anthony said they believed that every Australian should be living in communities that they truly believe in. Over the next three years, Youngcare plans to build 130 residential facilities nationally.

The facilities are individually-designed by award-winning architects to fit in with the natural environment and cater for six-to-eight residents, with considerations such as including carparking within the facility.

“We aim to build the best house in the street, not just for the neighbours but for the families and residents to have that sense of pride that this is their home,”
he said. “They should feel special because they are.”

The four founders of Youngcare came straight from the corporate sector and understood the importance of setting a standard that was going to stand out from the pack. Anthony says Youngcare was built on an emotional, rational and operational level.

“We are a not-for-profit and we’re very proud of that because that’s how we think, it’s not about delivering a return to shareholders.

“This started with the heart, was led by the head and then the hands came in behind them because everyone respected the heart/head approach.

“It’s quite a powerful story and such a compelling cause. No-one can argue about what Youngcare is trying to do. You’re young, you don’t think that could happen to you, your mum, your dad, your child, yourself.

“The founders gave up their lives for years because they felt so angry about how things were being done. It was
heroic but it was also infectious. People got behind it.”

No-one understands how quickly lives can be changed more than Clare who in the year 2000 was pinned under a truck for 37 minutes and suffered life-changing injuries (see the story on page 22).

“Youngcare started in 2005 because four mates said ‘I dare to challenge the status quo’,” Clare said. “The only place that one of their wives, Shevaunne Conry, suffering from MS, could reside was in an aged care home. She wasn’t even 30.”

Clare joined Youngcare in 2006 as a volunteer working with the charity for three days a week over two years.

“By December 2007, with the support of Brisbane behind us we had raised $4 million to build and house 16 individuals with high care needs in appropriate and dignified accommodation,” she said.

Fast forward 15 years and the Mayor is now on the Board of Youngcare. The charity has gone from strength-to-strength and is nationally-recognised.

“The wall of truth which sits proudly at Youngcare states that we have given away more than 1100 grants to help families keep loved ones at home instead of being forced to put them in aged care,” she said. “We’ve helped more than 40,000 people, and in this financial year, answered thousands of phone calls from people wanting help.

“Youngcare is incredibly important to me. As Mahatma Ghandi says: ‘The best way to find yourself is to lose yourself in the service of others’. I truly believe that.”

Plans to build a residential facility and a holiday home in Noosa had been in progress for the past decade and is now closer than ever with the Youngcare Lunch as part of Noosa Eat & Drink providing a much-needed funding boost.

“The Lunch in Noosa wasn’t about fundraising, it was about telling the story,” Anthony said. “We thought we might raise a small amount towards the project but we were blown away.

“When those four original geniuses, my mates, dreamed this up they had no idea of the impact they would have,” Anthony said. “Two of the original founders were at the Noosa event and they were so proud. They didn’t set out to conquer the world but they are.”

The $250 per head event raised $135,000, buoyed along by ambassadors and supporters including Karl Stefanovich who emceed the event; national ambassador Sylvia Jeffreys; and special performances by Pete Murray.

“We’re so grateful to have great supporters on behalf of those vulnerable young people and their families who just don’t want to be isolated,” Anthony said. “Mother Theresa said ‘the worst form of poverty in the world is loneliness’ – and that’s what Youngcare do; we try to solve the loneliness.”

For more visit www.youngcare.com.au or listen to the interview with Anthony on our “Everyone has a Story” podcast