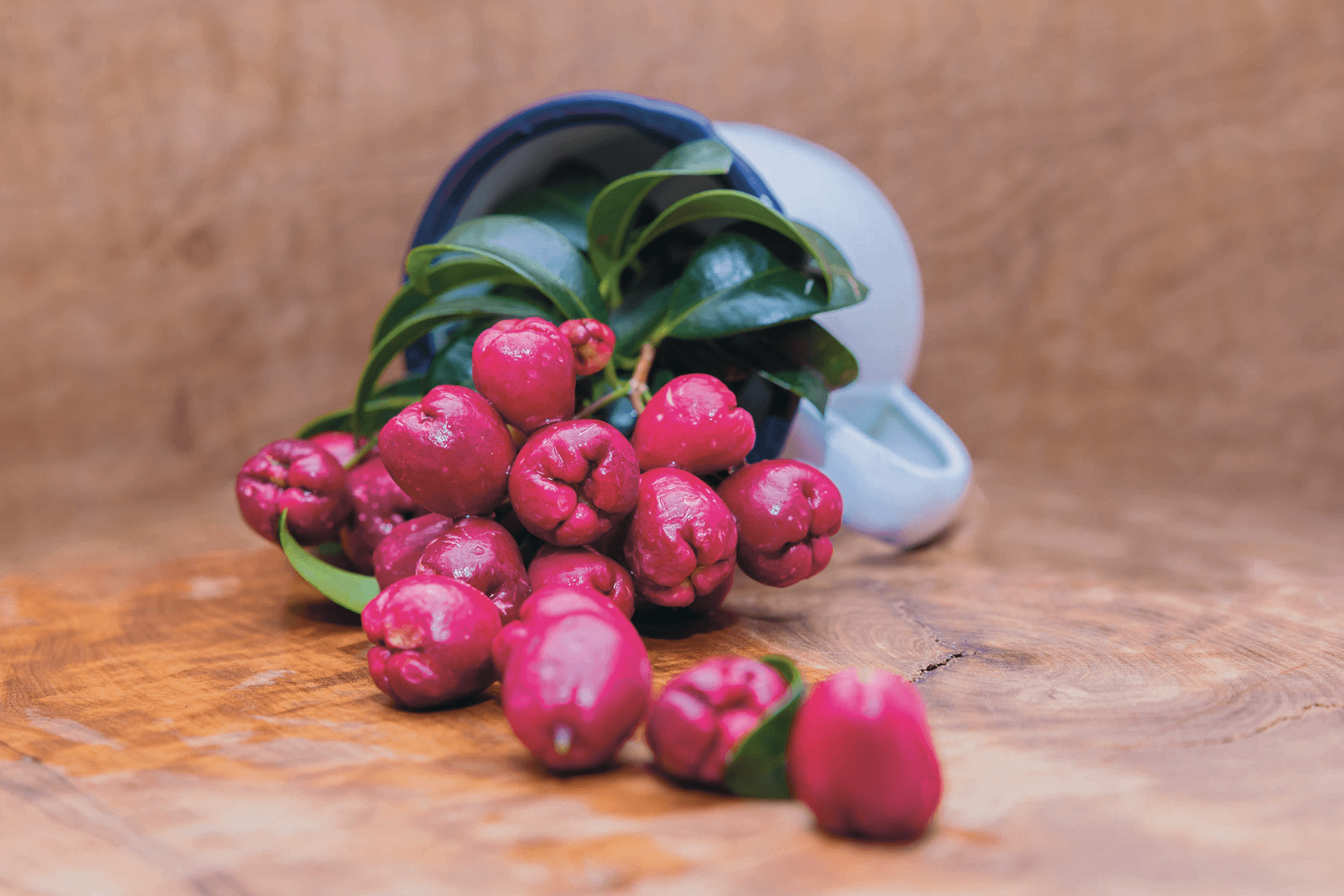 Spring 2020
A True Taste of Australia

Australia’s island-like isolation has allowed for thousands of years of unadulterated evolution, creating many species of fauna and flora with very unique characteristics not found anywhere else, as Matt Golinski discovers.

Kangaroos and koalas are animals we tend to take for granted having grown up with them all our lives, but to a visitor seeing them for the first time it’s often a magical experience.

Likewise, our edible indigenous plants can bring a bit of magic to our tastebuds when used properly and have been embraced by chefs all over the world, not for their ‘bush tucker’ status, but for their intense flavour profiles and as unique global ingredients.

Following are some of my favourites to cook with, many of which can be seen growing wild in the region at different times of the year.

Lemon and Aniseed Myrtle leaves can be used fresh straight from the tree, added whole to soups, curries and braises much the same as you would add bay leaves. They can also be finely chopped and added to stir-fries or salads. Commercially, the leaves are often dried and sold as a powder or as a tea and both are distilled into essential oils for the food and cosmetics industries. Lemon Myrtle contains the world’s highest percentage of citral, the chemical compound which gives lemongrass its flavour and the two can be quite effectively interchanged in cooking. Aniseed Myrtle has intense aniseed and liquorice compounds and is a great substitute for fennel seeds. 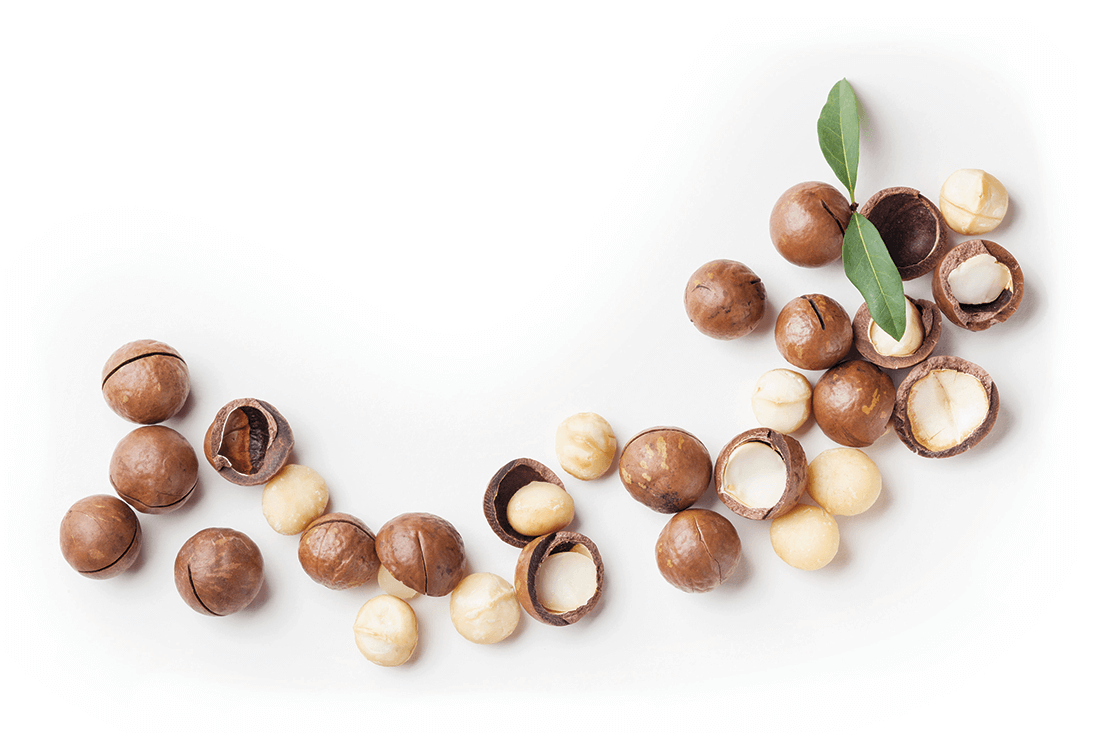 The tiny town of Bauple north of Gympie is believed to be the birthplace of the macadamia nut and for thousands of years it has played an important role in aboriginal ceremony and culture throughout South East Queensland.

Originally known as the ‘Bauple Nut’, it was later named after Australian scientist Dr. John Macadam.

The nut contains 75% fat and has a relatively mild flavour, making it a great local substitute for other nuts such as pine nuts, almonds and peanuts.

Lillypillies are grown as ornamental plants or windbreaks all over Queensland, and the small pink berries they produce are mostly left for the birds and bats to eat, or they eventually fall to the ground and rot. Shame.

When harvested, sorted and washed, they can be cooked down with sugar to make delicious jams and chutneys; they hold their shape well and impart a mild cinnamon/clove flavour.

The main variety seen in the region is known commonly as a riberry. The fruit is conical-shaped, bright pink and has a small insignificant seed inside meaning there’s very little preparation time required before cooking.

Sometimes called ‘Bushmans Coffee’, the roasted and ground seeds of certain varieties of native Acacia have a distinctive coffee/chocolate/hazelnut flavour, making wattleseed the perfect natural mocha flavouring ingredient for cakes, pastries and ice creams. The powder which resembles coffee grounds is usually soaked in boiling water to soften it before use. 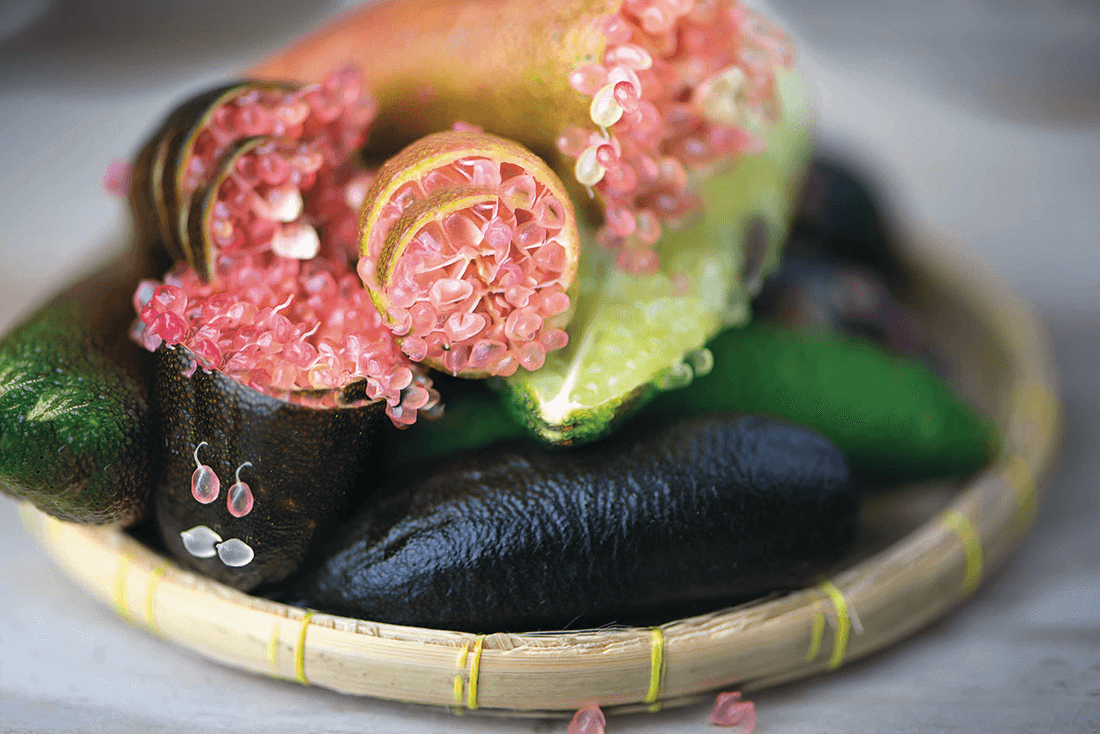 Citrus Australasica as its common name suggests, is a finger-shaped fruit which when cut bursts with thousands of tiny pearls or juice vesicles, which pop in the mouth when chewed releasing their tangy lime flavoured juice. Most commonly used in seafood dishes or mixed drinks, the limes are commercially grown across South East Queensland and Northern New South Wales and are at the peak of their season between January and April. Through some very clever hybridization, there are now many different coloured finger limes, with pulp ranging from yellow and green to a deep scarlet.

Each year around January, the Bunya Pine’s huge football-sized cones come crashing to the ground, splitting open to expose a network of teardrop shaped nuts, each encased in a hard shell. Possibly one of the most significant bushfoods in the region culturally. Aboriginal tribes would travel long distances to gather and discuss important issues relating to the environment, social relationships, politics and The Dreaming lore, sharing dance ceremonies and feasting on the bounty of nuts the trees produce.

Once the nuts are roasted or boiled, they are cut from their shells and can then be fried, baked, ground into flour or blended into soups or dips. Bunya nuts have a waxy texture and a flavour similar to chestnuts.

These deep burgundy plums (which closely resemble blood plums) are packed with antioxidants, vitamins and minerals and are good for everything from your kidney function to your eyesight.

In their raw form they are very sour, and are normally cooked down with sugar into jams and syrups to make them more palatable.

Their flavour and acidity marries well with gamey meats like duck and venison as well as desserts and ice creams.

There are many different varieties of this hardy desert plant, which flourishes in arid regions all over Australia and is often used as a high protein food supplement for sheep and cattle.

The leaves are naturally salty and herbaceous and can be used fresh in salads, steamed or boiled, or deep fried into a salty, crunchy snack or garnish.

Mentha Australis is the delicate small leaved relative of better-known mints such as spearmint and peppermint. It has long been used in aboriginal culture as a flavouring, an insect repellent and as a medicine.

The leaves when picked from the stems can be added to Asian salads or sprinkled on roast lamb or peas, or they make a nice garnish for desserts and cakes.

Also known as New Zealand spinach or Botany Bay spinach, Warrigal Greens are a coastal plant with leaves similar to regular spinach and can be cooked and used in much the same way. The small tender tips can be eaten raw and the larger leaves steamed or stir-fried. Warrigal greens can easily be cultivated from seed or cuttings in a home garden.

Native Alpinia gingers are often planted as a hardy decorative plant in home gardens, but both the rhizome at the base of the stem and the fruiting berries at the top can be eaten.

The root when peeled and grated is like a mild form of galangal and can be used in everything from curries to cakes. The new leaf shoots and blue fruit, which resemble blueberries, both have a mild ginger flavour and can be used to flavour dishes.

Australia’s native stingless bees produce honey which is thinner than European bee honey and has a distinctive lemon flavour. Hives are normally seen in the branches and trunks of trees in the wild, but more and more people are keeping small box hives in their yards, (often colonies salvaged from trees which have been cut down) making it possible to split the hive and collect the honey. Native bees only travel within a 500m radius of their hive to collect pollen, making their honey a true reflection of the flora in the immediate area.

The honey can be used in sweet or savoury dishes, but sparingly; because a native hive only produces small amounts of honey it generally sells for about $200 per kilogram. 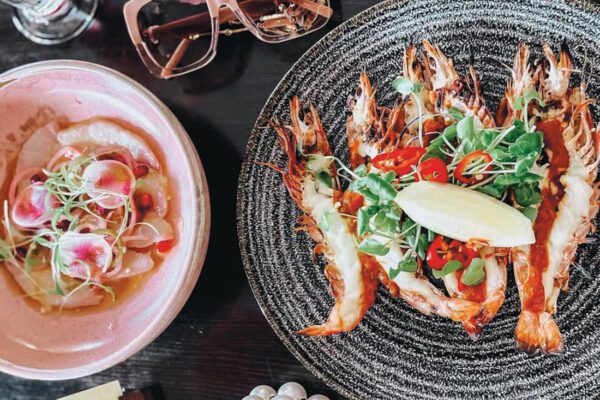 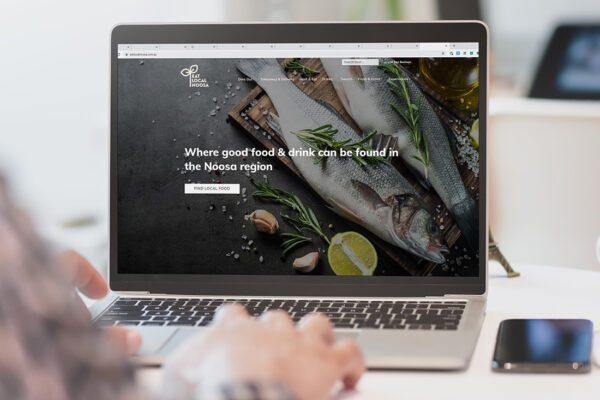