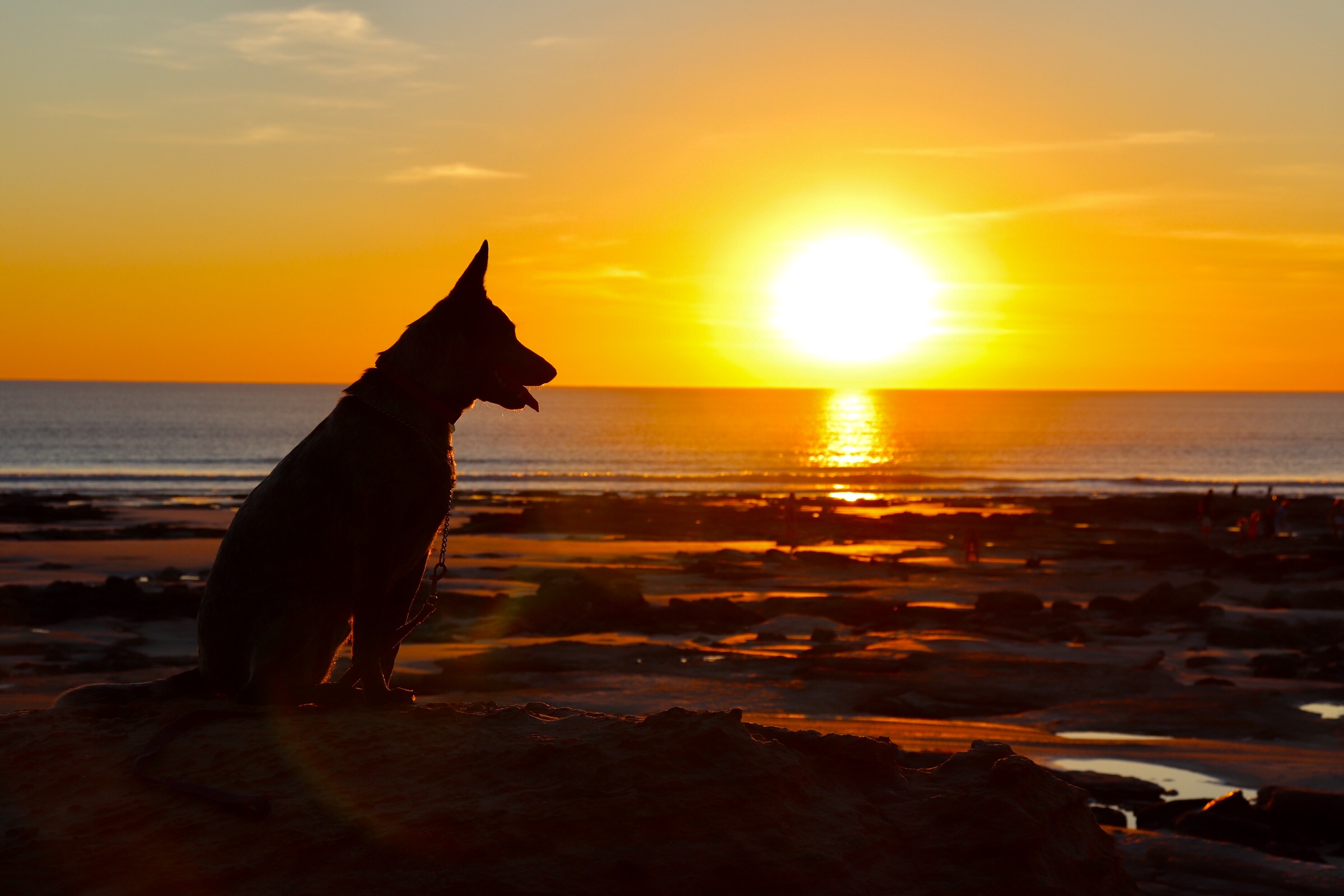 There’s nothing quite like feeling the sun on your face and the wind in your fur as you barrel along the coastline on a road trip; ah! It’s a dog’s life as Jolene Ogle discovers.

For many of us, a holiday is no fun without our furry friends by our side. Two pups heralding from Noosa are busy travelling the back roads of Australia and blogging about their adventures as they dodge crocodiles, meet new friends and watch the sun set over the ocean.
Sky and Enzo are setting the example of how to travel with your pooch with their owners capturing their journey and sharing travel tips with fellow animal lovers.

While scrolling through Gumtree, Renee stumbled across an advertisement for Sky. Won over by her cute smile, Renee and Bernie couldn’t resist the adorable puppy. When she was just six-months-old, the couple decided to hit the road and take Sky with them.

“We believe that a dog is a commitment for life. She is our fur baby, so we had no choice but to take her,” Renee says.
“Some of the pros of taking her was for security and forcing us to exercise every day. It also gave us a routine.”

Sky, now two, had to be toilet trained in just one week and has since learned a swag of tricks, including paddle boarding.

Sky and her owners have seen 28 “big” landmarks since starting their adventure. The Big Pelican here in Noosa was the first, followed by other favourites such as the Larry the Lobster and the Big Mango.

On her travels, Sky has dodged crocodiles, worn a muzzle to avoid eating wild dog bait and very nearly sent the caravan down a mountain range.

“While in Tasmania, it poured down rain for four days straight and as we were not able to exercise Sky over this time, she protested by chewing the metal brake cable of the caravan,” Renee recalls.

“We were heading down the mountain range and the van was pulling to one side. We pulled over and discovered what had happened! Lucky, we had the tools to fix it!”

Searching for pet-friendly places to stay has seen Renee and Bernie travel to places they wouldn’t have thought to visit.

“Some of our favourite stays were at Showgrounds or paddocks at the back of a country pub,” Renee said.
“We stayed at a number of cattle stations and came to the conclusion that Sky is the world’s worst cattle dog. She was scared of the cows and even petrified of the statue cows in Kiama and Margaret River.” 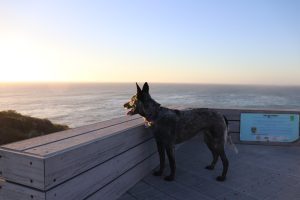 Born on a dairy farm in 2016, Enzo won over owners Ian and Georgia the very first time they met. Enzo was scooped up and soon introduced to camping, swimming and the beach by his active owners.

A plan was hatched to sell up in NSW and relocate to Peregian Beach, from where Ian and Georgia hoped to spend at least six months travelling. There was just a house sale, relocation, sourcing a suitable vehicle and some puppy training to be organised first!

“The test trip was from Geelong to the South Australian border along the Great Ocean Road,” Ian recalls.
“We decided to create ‘Enzotraveldog’ as a blog written in Enzo’s voice. The first three weeks went remarkably well, despite the blogging being a somewhat naïve leap.”

Enzo’s blog – www.enzotraveldog.com.au – is now packed with stories of his travels as they make their way around Australia.
Since the first test trip, Enzo has travelled Tasmania and most of southeast Queensland with Ian and Georgia ready to plan longer trips.

When out on the road, Ian says he is amazed at how many other people are travelling with their dogs.

“Admittedly we only stayed in dog-friendly caravan parks and campsites, but there’s a lot of dogs ‘on the road’,” Ian says.
“There are Facebook groups dedicated to travelling with dogs. It’s a thriving subculture! Many of the restaurants and pubs were dog-friendly and Enzo even got to walk around a couple of art galleries.”

Six months into their adventures, the van is ready to go off-grid and the trio is planning to travel anti-clockwise around Australia. “The positives of travelling with a dog far outweigh the negatives,” Ian says.

“Exploring places on foot while walking your dog is a great way to see Australia up close.  Having a dog with you also reduces the temptation to drive too far in one session.

“It is all about seeing places rather than highways, after all.” 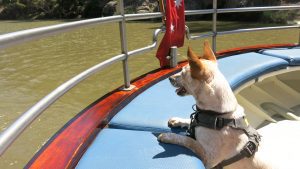 Top tips for travelling with pets
– Allow a budget for emergency vet bills. – Ensure vaccinations, worming and tick treatments are up to date.
– Ask your vet to help put an emergency kit together.
– Plan your travels as some pet-friendly caravan parks don’t allow pets during peak periods like school holidays. Sky and her owners travelled inland during these times and stayed at outback pubs and small-town showgrounds.
– There are some great apps to help find pet-friendly accommodation such as Wikki Camps and Mad Paws; even local Visitor Information Centres can help you find dog sitters while you are exploring. 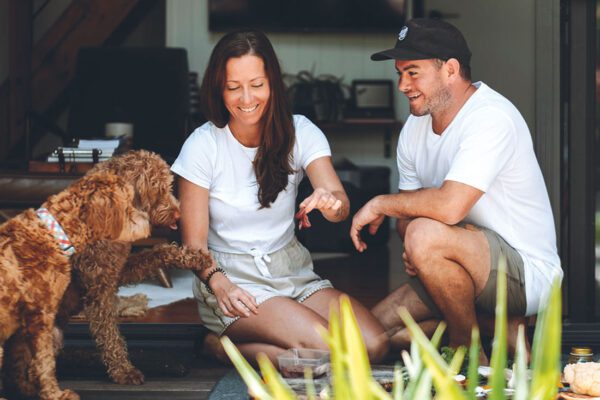 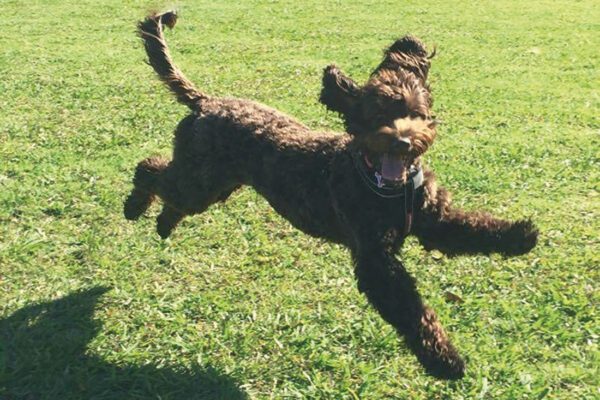