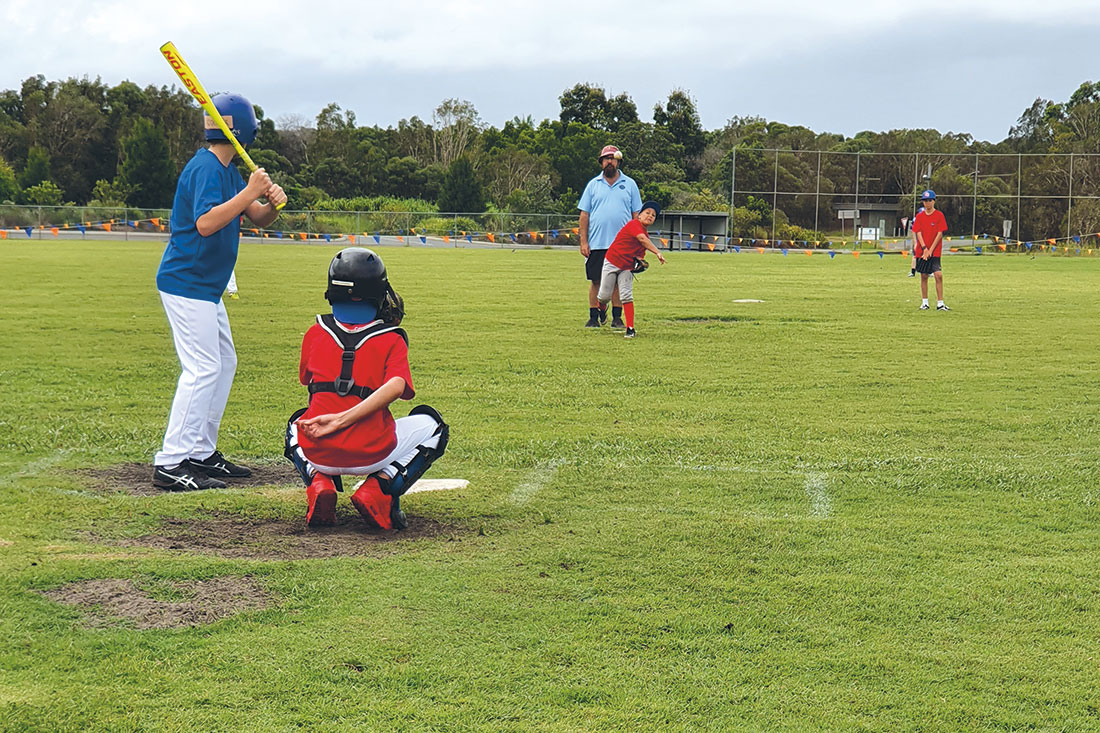 There’s a sport that’s not as embedded as deep into Aussie culture as ‘the footy’ or cricket, yet major league American clubs are instantly recognisable global brands – you know what sport the New York Yankees, White Sox and the LA Dodgers play without anyone having to tell you. John Caruso discovers a local club that’s helping to spread some magic and mystery.

For a few years, my wife and I wondered when our son might find that ‘thing’ that makes his eyes light up. Max displayed a flair for drawing and art and as he grew older, anime and manga and all things Japanese interested him. At one point he told us that he was going to live in Tokyo so he could attend Comic-Cons, funding this adventure by working at a popular fast-food chain.

He was given musical instruments however after an initial interest they now gather dust and the usual round of trying a bit of everything followed – soccer, rugby union, Auskick, tennis and even karate.

I’m not entirely sure where the idea of baseball came from and asking a 13-year-old doesn’t shed any light on the matter however watch most American TV shows or movies and there’s plenty of scenes where a dad and his kid are gloved up and throwing a ball about – and there’s many a movie that features the underdog baseball team that triumphs against the odds.

We found ourselves at the Mudjimba Multisport Complex at the Sunshine Coast Baseball try-out day ahead of the start of the season around September last year. Max’s bat didn’t connect with many balls that afternoon and not a lot landed in the glove so I was expecting a degree of frustration equivalent to what he experienced with tennis. To my surprise and delight, he walked off the diamond with wide-eyes and proclaimed “baseball is going to be my thing!”

Fast-forward two seasons and the kid’s skills continue to improve, he was awarded The President’s Trophy and his team, The Riptides, played at the Queensland State Titles in April this year.

His favourite player is Max ‘Maximus’ Fried from the Atlanta Braves who just happen to be the current World Series Champions and the kid talks of making millions playing in the US someday.

Bret Buckland is the former president and now treasurer of Sunshine Coast Baseball who developed a love of the game when he was young, when his family was living in Canada.

“In the early days of the Sunshine Coast Baseball Club we had ex-pats, North Americans and Canadians, and people like me who played when they were younger,” he said. “When I moved to the coast about sixteen years ago, I had a keen interest in those baseball diamonds at Mudjimba. The game was popular on the Sunshine Coast with eight clubs and many diamonds.

“The diamond at Mudjimba that we use today was of an international grade – in fact it was built for the 2000 Sydney Olympic Games and teams from Japan and South Korea would come here to train in the lead up to the Olympics.”

“Geoff Wade started playing baseball when he was five; he’s now in his 50s and has never stopped playing,” Bret said. “He has an amazing passion for the sport and posted on Facebook that he was looking for coaches; myself and two American guys responded.

“I hadn’t played since I was fifteen and the other two had played little league so there was a lot we had to brush up on.”

Gareth Jones is the current CEO of Baseball Queensland and was a Development Officer when Geoff was gathering his coaches and ball players.

“Gareth took an interest in what we were trying to achieve here on the Coast, and he ran us through a session on coaching,” Bret said. “The emphasis was on making it fun and not necessarily focusing on drills and skills but providing an environment that fostered game-based skills development.

The Club started with a ten-week season with twenty-one T-Ballers under lights Wednesday nights on the soccer fields at Mudjimba.

“At that stage the grounds had been redeveloped and all the baseball infrastructure from the past had been torn down apart from a couple of dugouts and those high fences that are still standing today,” Bret said. “From there, Sunshine Coast Baseball has grown every season.”

A casual weekend gathering soon developed into something more focused.

“There’s been strong growth in our senior’s membership, growing from a couple dozen blokes having a hit on a Sunday afternoon and sharing a beer afterwards, to possibly six teams competing in our North Shore Champion’s Plate League this season,” he said.

“Our junior numbers have struggled but the club had some strong seasons with the assistance of Baseball Queensland. We were getting into schools and running clinics and we could see that was a key to growth however, COVID got in the way and stalled that flow. We’re hopeful of restarting those school clinics with the help of some of the players from the Brisbane Bandits,” Bret says.

Historically the clinics have been run in term three of each year with no cost to the schools. Coaches are provided by Baseball Queensland and Caloundra Christian College is one of the first schools that will offer their students an opportunity to pull on a glove and toss a baseball about later this year.

“For Baseball Queensland and Baseball Australia the messaging has been around it being a non-contact sport. A safe sport compared to football codes, especially with the awareness of the long-term effects of concussion on young athletes,” Bret says.

When juniors do get involved, statistics show that they stick with it.

“We’ve got a great retention rate. The kids that do come along stay because a big part of what we do is focused on fun when we train and when we play; and secondly the friendship and sense of community is important to our club.

“With baseball I’ve seen rapid improvements in skill levels in short periods of time, even if you’ve never picked up a bat or tried on a glove before and we’ve seen that consistently since we started in 2017. Ninety percent of our members have never played the sport before, maybe it’s a Hollywood-inspired thing. There are a lot of movies that deal with the mystery and romanticism of baseball,” says Bret.

The current cohort of juniors at Sunshine Coast Baseball draws kids from Caloundra to Pomona and even Maleny who come together mid-week for training and a game against each other every weekend during the ten-week season that starts in October.

Riding this wave with our son Maximus may last a lifetime or it may last only a few more years. Either way we couldn’t be prouder of our kid, and we love the passionate volunteers and mums, dads and grandparents that make up the baseball community on the Coast.

Turns out baseball might just be “his thing” after all.

Want More? Listen now to our interview with Bret from our podcast.

Nikki Fogden-Moore - Relationships are about amplification

Greg Ollerhead - An eye for style