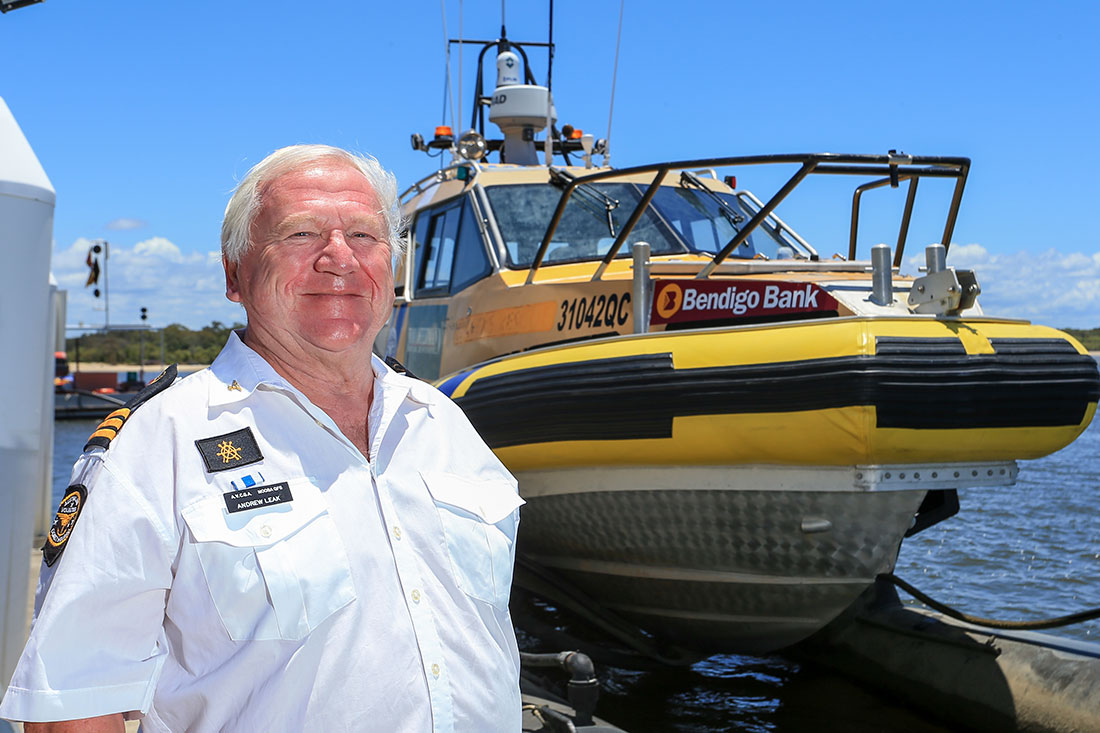 Flotilla Commander of the QF5 Coastguard, Andrew Leak has dedicated his life to the water and protecting those who use it. Jolene Ogle meets the man at the helm.

Sat behind a timber desk in his humble office at the Noosa QF5 Coastguard headquarters in Munna Point is Andrew Leak, Flotilla Commander. Cheery yet stern, this man is in charge of keeping thousands of boaties safe each year as they cruise the Noosa coastline or cross the infamous bar.

Andrew has more than 110 members under his guidance from the radio operators who receive over 5,600 transmissions each quarter, to the boat team who recently tried to save a 40-foot yacht that burst into flames.

Born in the UK, Andrew was just 14 when he left home to study at the nautical college. On his 16th birthday he travelled to Hong Kong to board a boat as a member of the British Merchant Navy.

Andrew always knew he would live a life on the water telling his family he wanted to join the Navy when he was just 11-years-old.

“I love the ocean. It is mightier than though,” Andrew reflects. “I love the tranquility, danger, respect and excitement it demands. My respect of the sea and the challenges it sets are my main motivator.”

As the Flotilla Commander, Andrew is required to be on-call 24 hours a day and 7 days per week throughout the entire year. It’s a job for which he isn’t paid a cent, but one he greatly enjoys and loves.

“This is a chance to impart my knowledge of the sea, while giving back to the community,” Andrew says.

The entire Coastguard team is made up of volunteers who all donate their time to keep the Noosa waterways and coastal area safe. Radio operators are required to do 24-hour shifts and the water rescue team can be called out at any hour of the night. Despite this, Andrew insists they are not heroes.

“We’re not heroes; we are just doing our jobs. We are the silent achievers. Nobody here wants a reward, we just want to give back to the boating community as best we can,” he says.

Listen to the Conversations in Noosa Podcast with Andrew. Available on Spotify, Apple and Google Podcast.