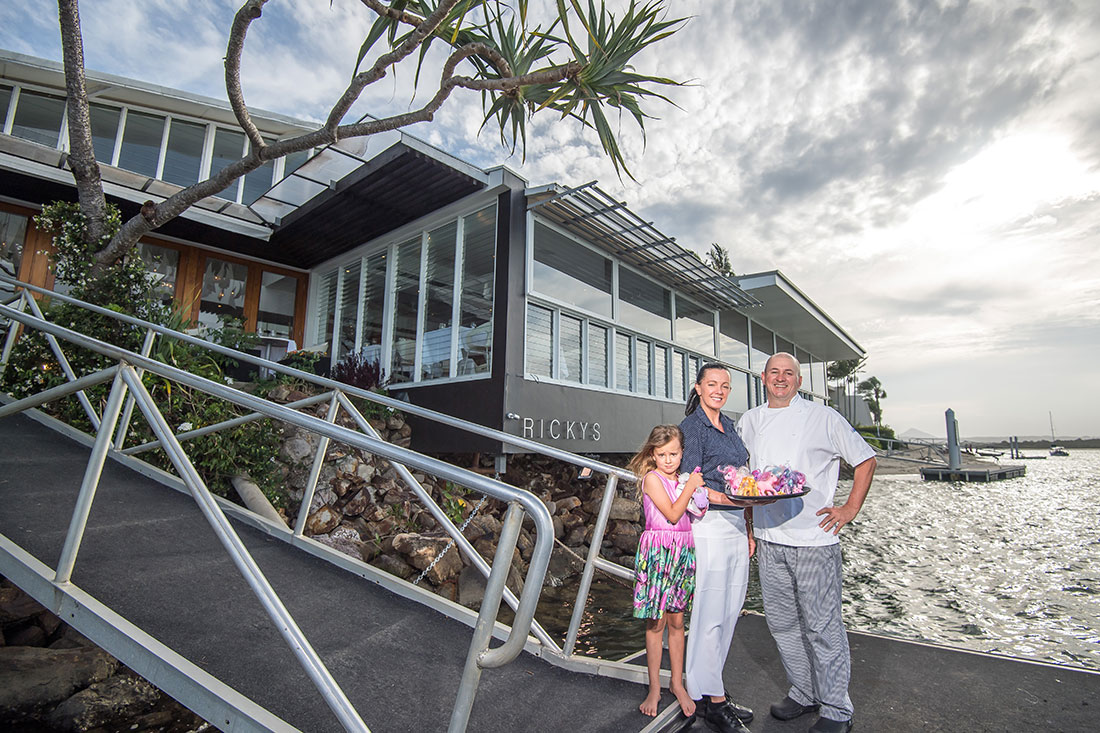 Away from the effervescence of hospitality, Helen Flanagan discovers the preferred sound for some, is the neigh of a breathless horse.

Lee Bradford contributes to the infectious sense of energy and enthusiasm at Ricky’s River Bar & Restaurant, as she glides across the floor serving food, wine and produce knowledge with a smile at the absolute waterfront address. No wonder she’s earned the admiration of many.

But take her away from the bright lights of work she’ll often head straight to the hills to follow her passion of endurance horse riding. The long-distance competition against the clock, tests the speed and endurance of a horse, challenges the rider over the effective use of pace, the thorough knowledge of the horse’s capabilities, also its ability to cross all kinds of terrain.

“Although the rides are timed, the emphasis is on finishing in good condition, not coming first,” explains Lee who grew up with endurance and race horses on a farm in the central NSW town of Tooraweenah. “And regardless of the rider’s skill or the ability of the horse, there’s always an element of danger.”

It was a fortuitous return to riding last January when Lee met Jim and Denise Green, regular diners at Ricky’s and owner/ breeders of pure-bred Arabian horses, considered to be the Rolls Royce of endurance riding.

“They were promoting the Tom Quilty Gold Cup aka Australian National Championships for Endurance Riding,” she said. “I told them Tooraweenah was the host town for the championships in 1991. They invited me for a ride and so far, I have successfully completed three 40km events.

“Even more thrilling is next year, when the Stirling’s Crossing Endurance Club (my club based in Imbil), will host the TQ Gold Cup, one of the most famous endurance rides in the world. But for me to qualify, I must complete two 40km and three 80km rides plus one 160km ride successfully.

Lee, who rides horses from various stables, in competitions around the country says her best memory was vetting-in after completing her first 40km ride which was on Chelleason Rembrandt (Remi) owned by the Greens.

Beside horses, another great love is partner Andy Davies. “We met about eight years ago in Bondi,” recalls Lee. “He became part owner and head chef of Bondi Trattoria, which I managed. About three years ago, we moved to Noosa with daughter Isla who will be 7-years-old on Christmas Day, when Andy was appointed head chef at Locale, which like Ricky’s is part of the Ogilvie Group along with Aromas, Wood Fire Grill and Maravista Farm.

“Andy is very supportive of endurance riding eventing as it gives me so much joy.

Isla also shares my love of horses and is having riding lessons. The love even extends to My Little Pony toys. Collecting has gone from mother to daughter and so far, we have over 50 in the ‘stable’.”

It’s totally about horses and hospitality for Noosa Boathouse’s Venue Manager Lisa Berry with a commitment so passionate it could be coined ‘horsepitality’.

Husband and builder Barry became a convert to horses after meeting Lisa, who grew up around them, in 1998. The bond intensified when their daughters Tayla (now 16) and Grace (14) were aged around two and led around on Shetland ponies prior to joining the Eumundi Pony Club, entering gymkhanas and competing in national events in Sydney and the EKKA from just 9-years-old.

Lisa and Barry learned patience is a virtue as they became proficient drivers of the horse float navigating it all over the countryside and interstate, wherever their girls were competing whilst at home, ensuring stock feed levels were maintained.

The exhausting chore of cleaning stalls and feeding the horses every morning and afternoon became the girls’ responsibility.

And let’s not forget all the washing, brushing and titivating the horses need to capture the judge’s attention.

“We ride six days a week at home and have a 4-6 week break during the Christmas holidays,” says Tayla who acknowledges the importance of their sponsorship by local clothing company GiddyUp Australia. “During the show season we usually compete every weekend from the Noosa Show to Ekka, plus there are five main state level competitions and the nationals at the International Equestrian Centre in Sydney.”

Competing at a high level, the girls have been the recipients of many ribbons, trophies and garlands. Standout wins include 5-year-old Grace, in her first year of competition winning first place at EKKA with a borrowed horse, jacket and helmet.

The Noosa Boathouse, with a menu which pays respect to the life aquatic, plus Sunset Bar, events space and coffee bar is perpetually ultra-busy. Somewhere in the mix Lisa manages to dispense ever-smiling service, however in the take-away area on the deck at Little Boatie, look out for Taylah and Grace who understand horse-riding is very expensive and are happy to chip in, albeit in a small way.